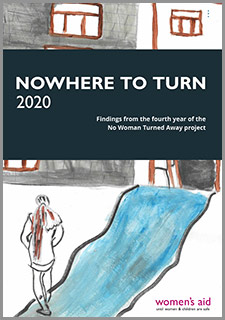 The Domestic Abuse Report 2020: The Hidden Housing Crisis examines the housing experiences of survivors of domestic abuse. It draws on evidence from the Women’s Aid Survivor Voice Survey 2019 (136 respondents) and case study interviews. Key findings were:

“I tried to leave a few times…”
Of those 38 respondents who were still in a relationship with an abusive partner, 68.4% indicated that concerns around future housing were a barrier to leaving. Survivors who are not eligible for public funds (because of their immigration status) have even fewer housing options, as they are not entitled to housing-related benefits or for housing help from their local authority.

This “price to pay” included upheaval (including having to move several times), challenging housing conditions, ongoing abuse, and financial burdens. Private renting was often very difficult or impossible for those survivors claiming housing-related benefits because of the ‘no benefits’ policy adopted by many private landlords.

Those survivors who had asked their local housing team for emergency accommodation (because of domestic abuse) had received mixed responses. Survivors without dependent children felt that they were a lesser priority to housing teams.

Many survivors had or were still relying heavily on the support of friends or family in terms of a temporary place to stay and/or help with rent or other costs associated with setting up a new home. Survivors living temporarily with friends or family were very grateful for their help, however it was easy for the perpetrator to find them to continue his abuse and living environments were sometimes overcrowded.

Of the women supported by the NWTA specialist practitioners, 24.7% were eventually accommodated in a suitable refuge space.

However, there were inequalities in refuge access depending on the specific barrier that women faced. Women fleeing with an older male child and those with drug use support needs were the least likely to find suitable refuge accommodation.

The full reports are published on our website along with Women’s Aid’s other research and our blog written by the research team.