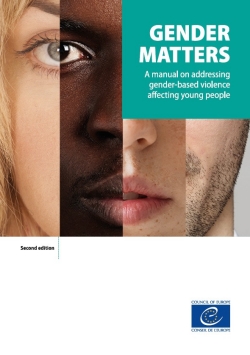 Gender-based violence refers to any type of harm that is perpetrated against a person or group of people because of their actual or perceived sex, gender, sexual orientation and/or gender identity. Gender-based violence can be sexual, physical, verbal, psychological (emotional), or socio-economic and it can take many forms – from verbal violence and hate speech on the internet, to rape or murder. Statistics show that gender-based violence affects women disproportionately.

Gender-based violence undermines the core values of human rights on which the Council of Europe is based and to which its member states have subscribed. It is a problem in all member states and affects millions of women and men, young people and children, regardless of their social status, cultural or religious background, sexual orientation or gender identity.

Preventing, addressing and combating gender-based violence are intrinsic to human rights education, youth work and non-formal learning activities which support young people on their path to autonomy as active citizens, mindful of everyone’s human rights. The issues that are addressed through this work are all relevant to young people’s lives, and they relate directly to the world in which young people live.

Gender Matters should be used as a practical resource in guiding young people to become more aware of their own actions and the actions of others. It contributes to a better understanding of how to stay safe and secure and how to support those who have experienced violence in their lives. It will not suffice to eradicate gender-based violence. However it is a necessary and urgent step towards dignity for all.